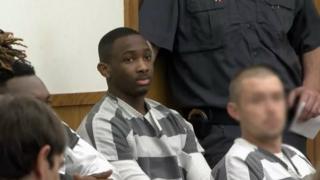 You know what his agenda is…

Two teenagers are facing life without parole sentences for capital murder, though it’s not clear they pulled the trigger.
On the morning of May 21, 2016, 56-year-old John Michael Taylor was found lying on the side of a road next to a convenience store. When police came, he allegedly told them that three men had forced him into their car, robbed him, and shot him behind the store. He died as a result of a single gunshot wound.

Two of the three involved, however, were not actually men. One, Lil’Roderick Williams, was 14, and another, Devonte Raymon Hill, was 15. And authorities have not yet disclosed which of the three actually fired the fatal shot.

Although only one of the three appears to have directly killed Taylor, the two teenagers are being charged as adults for capital murder alongside their alleged co-conspirator, Santwone Cornelius Jones, now 27. If convicted, the two could face life in prison without the possibility of parole. The pair are among the youngest ever to be charged with capital murder in Alabama state history as adults, C.J. Robinson, the lead prosecutor on the case, told the Montgomery Advertiser.

This is not the first time Robinson, a white assistant district attorney for Alabama’s 19th Judicial Circuit, has fought to charge a Black teenager for a murder he didn’t directly cause, thanks to the state’s accomplice law. The law allows for defendants to be charged with murder, even if they didn’t intend to kill anybody, if they were involved in the commission of a felony that resulted in a killing. The doctrine is known as felony murder.

Earlier this year, Robinson secured 65 years, including a 30-year felony murder sentence, for Lakeith Smith, a Black teenager who took part in a robbery when he was 15, though he did not kill anyone. A police officer fatally shot Smith’s associate, A’Donte Washington. But Smith and three others were convicted for Washington’s murder. Robinson told the press that he was “very pleased” with the outcome, noting that Smith would not be eligible for parole for at least two decades.

In this most recent case, Robinson has publicly argued that the two teenagers “needed to face the same charges” as their older co-defendant, despite acknowledging that the two are exceptionally young. Under Alabama state law, 14 is the minimum age one can be charged as an adult.

In a phone interview, Robinson declined to discuss who he believes actually killed Taylor, or any specifics about the case, but he noted that Alabama state law allows all three to get capital murder charges because of their alleged participation in a felony that resulted in a homicide. “I have no hang-ups or reservations, asking for any sentence allowed by law, whether it be for the most culpable actor or one of the accomplices,” said Robinson.

Robinson did not respond to an email inquiry from The Appeal asking about whether race plays a role in charging decisions.

The neuroscience of teenage crime

If convicted in this case, Jones, the adult co-defendant, will be eligible for the death penalty. As of 2017, just over half of the state’s 188 death row inmates are Black, though Black residents only make up about a quarter of the state’s population.

The U.S. Supreme Court has outlawed the death penalty and limited life without parole sentences for juveniles on the basis that young brains are still developing and have immense capacity for change. In the 2012 case Miller v. Alabama, the Court ruled that sentences committing children to die in prison should be reserved for “the rare juvenile offender whose  crime reflects irreparable corruption.” Petitioner Evan Miller, like Williams, was a 14-year-old boy tried as an adult for a murder.

On the phone, Robinson acknowledged the restriction on his ability to seek life without parole for the two teenagers, noting that there has to be “a procedural hearing for life without parole, it’s not automatic,” when it comes to juveniles convicted of capital murder.

“While academics and advocates decry the continuing reliance on the felony murder doctrine for all affected populations—juvenile and adult defendants/offenders alike—it is particularly inapt for juvenile offenders, whose anticipation and foreseeability of consequences is more limited,” Levick said in an email. “This population is more impulsive and impetuous in their involvement in crime and unlikely to make the type of cost-benefit analysis or assessment of risks that we might reasonably ascribe to adults.”

Robinson said his office does take “all factors into consideration,” including youth brain development, when making charging decisions. He added that he has no problem seeking life without parole for juveniles who were accomplices in a felony that resulted in a murder, depending on the facts of the case. “If somebody was in the back seat listening to their iPod and the only evidence was them listening to their music, that would not be the kind of situation where they would warrant capital murder,” he said. “But if the evidence was there to convict them of capital murder, then the proper punishment would be life without parole.”

Such charges are not out of the ordinary for Robinson, who has brought several capital murder charges in the last four years. In 2015, he was namedAssistant District Attorney of the Year, having assisted in two high-profile capital murder trials the previous year, which resulted in one death sentence and two life without parole sentences.

He has also spoken out publicly in support of “truth in sentencing” legislation, arguing that parole is weakening the “deterrent” prosecutors can instill in would-be criminals.

In recent years, advocates have challenged the harsh prosecutions of accomplices for murders they did not commit during participation in felony acts, such as a robbery. This week, California limited this long-held practice and created a pathway for hundreds of prisoners to request resentencings. The Colorado state Supreme Court also recently upheld a state law reducing sentences for juveniles sentenced to life without parole for felony murder.

via An Alabama Prosecutor Locked Up 4 Black Teens For A Murder They Didn’t Commit. Now He’s Trying 2 More. – The Appeal