Who are the real terrorists?

A Cobb County 18-year-old said he planted a bomb inside a middle school and was going to shoot anyone who survived the explosion, authorities said.

According to an arrest warrant obtained by Channel 2, “(Brady said he) planted a bomb inside the school and people will die. After the bomb explodes, (Brady said he) will use a gun to kill as many people as possible.”

On Wednesday, the school district released a statement to the news station that said, in part:

“Last week our school received an email which contained threatening content. An investigation was immediately launched involving the Cobb County School District Police Department, local law enforcement and the Georgia Bureau of Investigation … As the law enforcement investigation is ongoing, we cannot add any more details at this time.”

The district did not say if Brady attends a county school or elaborate about his connection to Floyd Middle.

A school district spokesman admitted the school did not notify parents about the threat, which worried sixth-grade parent Helene Howard-Everett.

“It’s very scary. I mean (it’s) definitely something we would want to be notified about,” she told Channel 2. 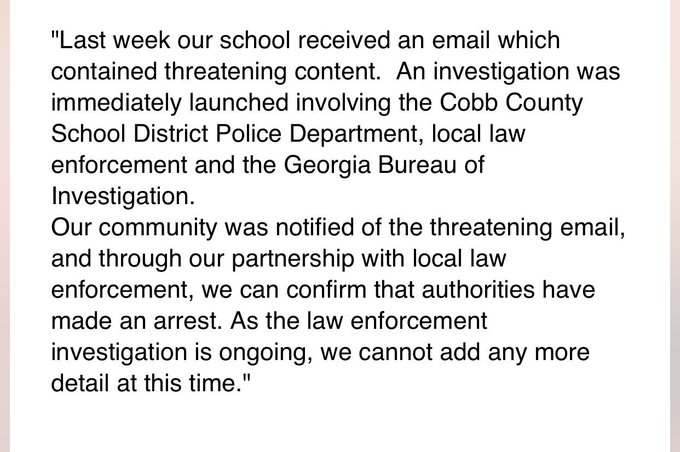 JUST IN: Response from the Cobb County School District about my story involving a teenager who allegedly threatened to plant a bomb inside Floyd Middle School and use a gun to kill anyone who survived the explosion. Live starting at 4. @wsbtv

The bomb squad and Cobb County deputies searched Brady’s apartment in the 700 block of Creekside Circle on Friday before arresting him, Channel 2 reported. No explosives were found in the apartment or his car.

Brady faces a count of felony terroristic threats and acts, according to jail records. He remains in the Cobb County Jail without bond, as of Wednesday afternoon.