People sleep on this dude just because he seems “hood” but he stay on some good shit especially in Tha Town…. never judge a black man by European standards….

Beast Mode is the best. And I mean that every every possible way. He appeared on Real Time with Bill Maher recently where he was asked about Donald Trump attacking his character as “unpatriotic” for not standing for the National Anthem. Beastmode responded as only Beastmode can.

“That motherf—ker says a lot of shit,” Lynch said of Trump. “But at the end of the day, you call me unpatriotic, but you come to my neighborhood where I’m from and you’ll see me take the shirt off my back and give it to someone in need. I mean what would you call that?”

Unlike his accuser Marshawn understands what patriotic means and he backs it up with his actions.

Mostly, Marshawn is well known for giving back to his Oakland community. It’s why he’s the Raiders Walter Payton Man of the Year nominee. His most recent endeavor is to combat gentrification.

“It’s basically when, for me, it’s a lot of white people come move into the hood and kick everybody out that’s there,” Lynch told Maher. “I’ve been a witness of it since I was a small jitterbug so I mean now that I’m grown up and I’m seeing it, I understand it a little more.”

“While banging my head against people,” Lynch said of playing football, “I had the opportunity to make a couple dollars so therefore I started to go and buy up some real estate in the area where I grew up at in order to give people opportunity for housing.”

Gotta love Marshawn. And if you’re an Oakland native, you gotta love him even more for the love he has for his people. 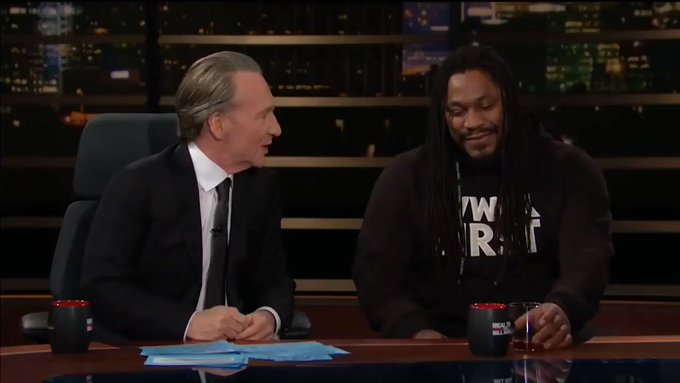