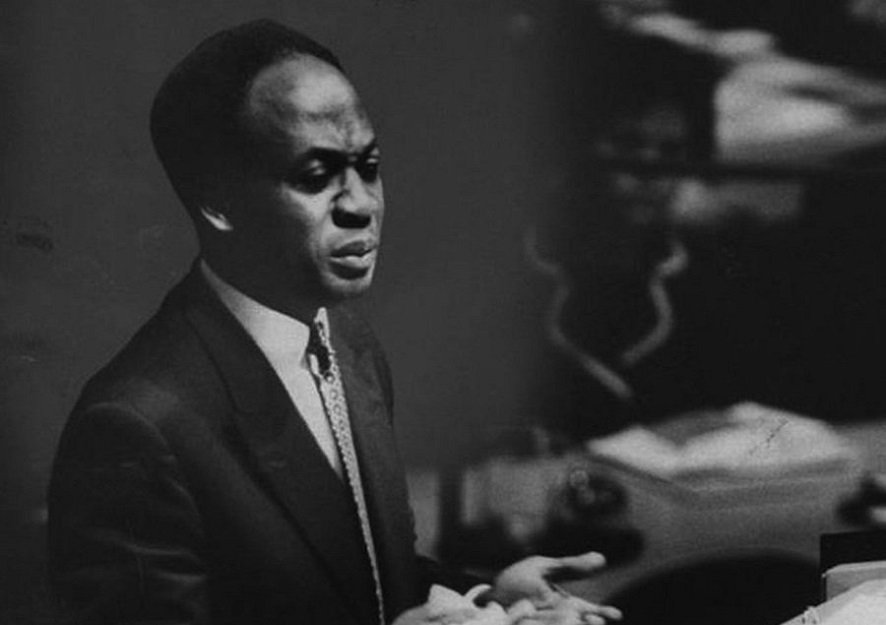 More proof of the CIA and what the really on…

It’s been 53 years since the first president of an independent country in sub-Saharan Africa, Dr Kwame Nkrumah, was overthrown in a coup d’etat on February 24, 1966, while he was out of Ghana on a peace mission to Hanoi aimed at bringing an end to the United States intervention in Vietnam.

In 24 hours, lower-ranking military officers and police officials led by Colonel E. K. Kotoka, Major A. A. Afrifa and the Inspector-General of Police, Mr J. W. K. Harley had carried out the coup.

They announced the overthrow on state radio and made their reasons clear: to end Nkrumah’s alleged alliance with the Soviet Union and China; alleged corruption, dictatorial practices, oppression; and the introduction of the unpopular preventive detention laws.

Nkrumah was reportedly in disbelief after he was informed of the coup by the leader of the People’s Republic of China, Premier Chou En-lai, during a stop-over in Peking for consultations.

Immediately, the deposed president and supporters accused the United States of complicity in the coup as the Western power had already expressed anger at Nkrumah’s close ties to the Soviet Union and China during the Cold War.

American media, including The New York Times, had also tagged Nkrumah as a “despot”, “tyrant”, “devious”, “ruthless”, “narcissist” and of “megalomaniacal excesses”.

Meanwhile, there was no comment from America’s Central Intelligence Agency (CIA) until 1978, six years after Nkrumah’s death, when first‐hand intelligence sources made available to The New York Times the role of the CIA in the coup.

The intelligence was disclosed immediately after former CIA operative, John Stockwell, briefly described it in a footnote to his book, “In Search of Enemies.”

The sources said a high‐level interagency group that monitors CIA’s clandestine activities in Washington, known in 1966 as the 303 Committee, had rejected a previous request from the CIA to plot against Nkrumah.

“At one stage before the overthrow of Mr. Nkrumah, the sources said, the C.I.A.’s station chief in Accra, Ghana’s capital, requested approval from higher headquarters for the deployment of a small squad of paramilitary experts, members of the agency’s Special Operations Group.

“Those men, the sources said, were to wear blackface and attack the Chinese Embassy during the coup, killing everyone there and destroying the building. The men also were to steal as much material as possible from the Embassy’s code room,” reported The New York Times in 1978.

It added that Howard T. Banes, the station chief in Accra at the time and other operatives were enraged by the rejection of their proposal to raid the Chinese Embassy, at the time the Peking Government’s only embassy in Africa.

Meanwhile, the Accra station led by Mr. Banes were permitted to purchase some Soviet intelligence materials that had been confiscated by Ghanaian Army troops during the coup.

“After a payment of at least $100,000, the sources said, a special secret airplane flight was arranged and the Soviet materials—including a cigarette lighter that also functioned as a camera—were transferred to C.I.A. headquarters,” reported The New York Times.

The sources said the role of the CIA in Accra resulted in the addition of as many as 10 undercover operatives in Ghana and Howard T. Banes was quickly promoted to a senior position and eventually transferred to Washington where he became chief of operations for the African desk.

Stockwell’s book also noted that the CIA station in Accra got wind of the coup before it was hatched and was “nevertheless encouraged by headquarters to maintain contact with dissidents of the Ghanaian army for the purpose of maintaining intelligence on their activities.”

He added that the CIA gave the coup plotters a “generous budget” and maintained “intimate contact” that enabled it to coordinate the recovery of some classified Soviet military equipment as the coup took place.

However, one plan that was aborted by the CIA after it was proposed by the Accra station was for “a squad be on hand at the moment of the coup to storm the Chinese Embassy, kill everyone inside, steal their secret records, and blow up the building to cover the act,” writes Stockwell.

Despite the disapproval, he added, “the Accra station was given full, if unofficial credit for the eventual coup. None of this was adequately reflected in the agency’s written records.” Also, not all of the CIA’s covert operations were brought to the attention of the high‐level review group, 40 Committee, set up by the Nixon administration to authenticate some of CIA’s sensitive operations.

In 2001, the United States government released declassified CIA documents that proved the involvement of the intelligence agency in the overthrow of Ghana’s first president Dr Kwame Nkrumah. However, it failed to indicate any official backing.

Among the documents released includes a memorandum from the Acting Special Assistant for National Security Affairs, Robert W. Komer, to the 36th U.S. President Lyndon B. Johnson, handwritten on March 12, 1966.

The memo explains the U.S. stance on the coup and its plans to maintain relations with the coup makers for America’s benefit.

The coup in Ghana is another example of a fortuitous windfall. Nkrumah was doing more to undermine our interests than any other black African. In reaction to his strongly pro-Communist leanings, the new military regime is almost pathetically pro-Western.

The point of this memo is that we ought to follow through skillfully and consolidate such successes. A few thousand tons of surplus wheat or rice, given now when the new regimes are quite uncertain as to their future relations with us, could have a psychological significance out of all proportion to the cost of the gesture. I am not arguing for lavish gifts to these regimes—indeed, giving them a little only whets their appetites, and enables us to use the prospect of more as leverage.

But my experience is that the bureaucracy will err on the side of caution rather than initiative; hence my suggestion that, in expressing your pleasure to SecState and others over the Indonesia and Ghana coups, you [Page 458]make clear that we ought to exploit such successes as quickly and as skillfully as possible. You have no idea how important a word from you can be in setting the tone for the bureaucracy. And in this case I strongly suspect that my own suggestion is quite in accord with your own political instinct.

If you prefer, I would pass this word to Rusk and Bell; but at the moment there is simply no substitute for direct word from you.