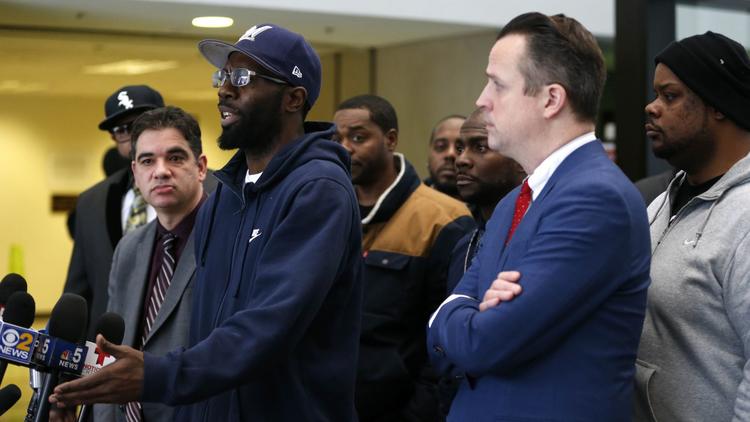 Derrick Lewis knew he wasn’t guilty of committing drug-related crimes in the mid-2000s. But he pleaded guilty to the cases in his mid-20s because he knew he faced the possibility of decades in prison, he said.

Lewis, now 39 years old, didn’t have money to hire a private attorney to help fight the allegations against him. He ended up doing two stints in prison on drug-related cases that since have been tied to disgraced former Chicago police Sgt. Ronald Watts.

“And no matter how innocent you is, you don’t want to think about the possibility of being locked up for 30 years,” Lewis said Monday at the Leighton Criminal Court Building. “Nah, I’ll take the 10 years. But it’s killing me inside because I know in my heart that I’m not guilty of these crimes that I’m being accused of.”

On Monday, Lewis finally got some sense of justice as he and eight other men, all African-American, filed into Cook County Circuit Judge LeRoy Martin Jr.’s courtroom and stood before him as prosecutors filed a motion to vacate their convictions. Martin overturned all of the convictions during a brief hearing.

A 10th man, who was in police custody on an unrelated matter, also had his previous conviction overturned, his attorneys said.

In a statement, the Cook County state’s attorney’s office said the review of the cases determined that it was appropriate to vacate the convictions and dismiss the charges “in the interest of justice.”

It was the fourth time a similar scene of mass exoneration involving cases connected to Watts has played out in recent years at the Leighton Criminal Court Building. Another hearing is scheduled for Wednesday to address the convictions of four other men, attorneys said.

If the convictions of those men also are overturned, it would increase to 63 the tally of people who have been exonerated of crimes linked to Watts and to officers who worked with him.

Attorneys believe there are similar cases still out there. Joshua Tepfer, an attorney with the Exoneration Project at the University of Chicago Law School, said there are about three dozen additional cases from the Watts era that attorneys have submitted to prosecutors for review.

At the center of the cases was the former Ida B. Wells public housing complex on the city’s South Side. Attorney Sean Starr said some of the people who became entangled with Watts didn’t even live there; they merely were visiting someone who did. Starr said the men tried to speak up about the false accusations as the cases snaked through the courts but that no one took them seriously.

“These people told as many people as they could and no one would listen,” Starr said after the hearing. “This was an open secret.”

After the hearing, some of the men emotionally detailed how the convictions upended their lives.

Kim Wilbourn still has nightmares about the ordeal. He had been visiting a friend at the Wells complex in September 2006 when he was detained by Watts and his team, who then framed him for drug possession, according to Wilbourn’s attorneys.

That interaction with Watts eventually led to him serving about two years in prison, Wilbourn said.

“You understand what this man did to me,” Wilbourn said after Monday’s hearing. “He took everything from me, not only that, he destroyed my family, he destroyed my mental ability. … I will never be the same.”

Lewis no longer lives in Chicago, and he’s faced difficulties getting a job because of the convictions. If he indicates he’s had a past felony conviction, he won’t hear back from an employer. If he doesn’t answer that part of an application, a job interview fizzles as soon as he reveals his past, Lewis said.

Monday’s exoneration felt long overdue, Lewis said, and he won’t ever get back the time he lost while in prison. The wrongful conviction also led to his distrust in law enforcement, he said.

“Black and brown skin gets you time in the penitentiary, period,” Lewis said after the hearing. “I can’t see it no other way.”

Watts’ corruption run ended in 2012 when he and Officer Kallatt Mohammed were convicted of using shakedown tactics against a drug courier who actually was a FBI informant. Watts was sentenced to 22 months in prison, and he moved to Las Vegas after being released.

In recent pending lawsuits involving him, Watts has invoked his Fifth Amendment right against self-incrimination more than 40 times, according to court records.

In the wake of the allegations, 15 Chicago police officers tied to Watts were placed on desk duty pending an investigation into their conduct. Chicago police said they were cooperating with the Civilian Office of Police Accountability on the investigation. COPA did not immediately respond to a request for comment on the status of the review.

via Drug convictions overturned for 10 framed by Chicago police sergeant: ‘He took everything from me’ – Chicago Tribune