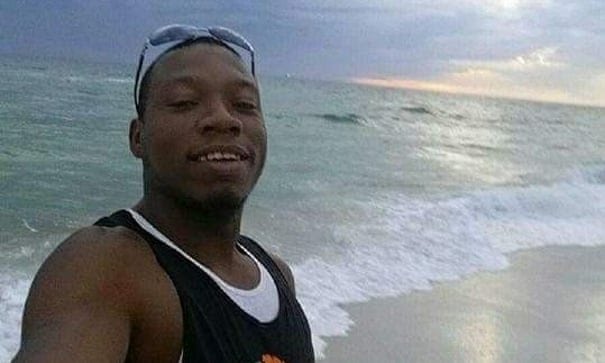 Shit like this is why I don’t play around in these racist small towns…. don’t get gas, nada…. y’all won’t even get a good look at me if I can help it… this was a lynching…. and no media has brought this up and this was in 2016….

The family of an unarmed African American man who was mauled by a police dog and then fatally shot by a white officer in Mississippi after fleeing a traffic stop have filed a wrongful death lawsuit in federal court.

Antwun “Ronnie” Shumpert, a 37-year-old father of five, was shot four times by Tupelo police officer Tyler Cook in June, after a police dog “viciously attacked” him, almost mutilating his testicles, the suit contends. Photographs of Shumpert’s injuries, which the Guardian has chosen not to publish, appear to show deep claw marks on his back and a large bite mark to the groin.

Authorities have not said why Shumpert was stopped but have said he was subject to an outstanding felony warrant. Lawyers argue, however, that Shumpert was illegally stopped for “driving while black” and say Shumpert was not driving a car registered in his name and was not asked for identification before he fled.

Police have said that after Shumpert ran away, he emerged from a hiding location and attacked Cook and the K-9 unit. The lawsuit, however, alleges that Shumpert first attempted to voluntarily surrender but was then attacked by the dog.

Shumpert, who was driving within the speed limit according to lawyers, died five hours later at the hospital in the early hours of 19 June.

Members of Shumpert’s family have called for the FBI to intervene in the investigation, which is currently being handled by the Mississippi Bureau of Investigation. Lawyers representing the family were scheduled to meet with the US attorney’s office in Mississippi’s northern district on Friday.

“Mr Shumpert was pulled over for a routine stop and ended up dead. That should not happen in a civilised society. And this family is very upset,” attorney Carlos Moore said.

“The way his body was mutilated and annihilated, it goes further than Jim Crow, it goes back to slavery days.”

The fatal shooting was the second in a one week span in the small city of Tupelo, . On 11 June, officers shot and killed 27-year-old Lyndarius Witherspoon, who is also black, after he allegedly shot at officers during a chase. The city has a history of allegations of widespread racism and discrimination against black residents. In 2006, concerns raised by the local NAACP spawned a “cultural diversity assessment” of city departments, which found a pattern of widespread racial profiling.

One major in the police department was reported by several officers to have demanded that police single out blacks for tickets and citations specifically. That same major was also said to have been hanging racially offensive materials from his office and using racially “disparaging and inappropriate language” with other officers.

Shumpert is one one at least 52 unarmed people who have been killed by US police in 2016. At least 18 of those victims were black, and at least 17 were white. Mississippi is 12th in country in terms of per capita police killings in 2016, up from 19th in 2015.

The Tupelo police department and the city of Tupelo did not respond to a request for comment by deadline.