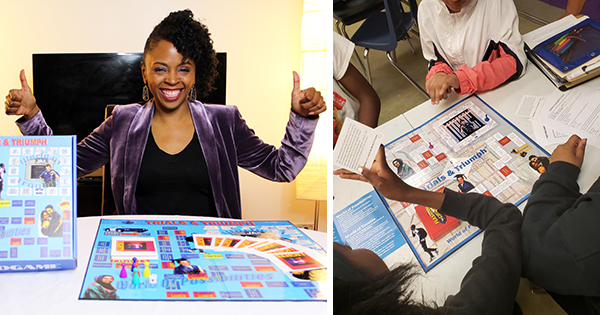 And people always wanna talk about the bad in Chi… good work sista educating the babies on this just-us system….

April D. Preyar, creator of the game, says that 35 minutes of play can save teens from having to serve 3 to 5 years in jail.

Trials & Triumph is a fun, interactive boardgame, which teaches teens and their families how to avoid getting caught in the snares of the criminal justice system. Players are faced with 54 real life scenarios, including social media crimes, group accountability, DUIs, and searches and seizures. Players learn better decision making and leave the play session equipped with 7 Rules of Police Encounters to apply to their daily lives.

The boardgame is for players 13 and up. It is suggested for four to six players.

200 Chicago area students play-tested prototypes of the game. Eric Pinedo, high school instructor and coach, described his experience with observing a play-testing session of his students, “My Scholars in my 5th Period Advisory at Chicago Perspectives IIT Math and Science Academy had the wonderful opportunity for Attorney Preyar to come in, present and allow the young men in my Advisory to play along and reap the educational benefits this board game has to offer. I personally witnessed this take place firsthand and would definitely recommend the purchase of this boardgame for your classroom.”

Trials & Triumph is based on Preyar’s wildly successful online educational platform called the “JustUs Junkie,” featuring short, informative Facebook videos. In the weekly videos, Preyar explains complex legal jargon in plain language. Preyar’s most popular video, “Four Things Not to Do if Stopped By Police,” garnered 1.1 million views in 48 hours! The video has since reached over 2 million views.

Trials & Triumph is currently in production. The retail price is $39.99. Purchase may be made at www.justusjunkie.store. Contact April Preyar for more information: (773) 648-1285 or info@aprilpreyar.com. See www.facebook.com/AttorneyPreyar or www.justusjunkie.com.