If you have used Windows System Restore, you may know that it isn’t always reliable. To make matters worse, it may not even be enabled on some machines by default.

RollBack Rx is a free to use Windows Time Machine software which is in many regards better in my opinion. The program is compatible with all 32-bit and 64-bit versions of Windows from Windows XP on including Windows 10.

Please note that there is a Home and a Professional version of RollBack Rx. The home version has some limitations, e.g. it limits the total number of snapshots and does not support advanced features such as remote management or multi-drive support. It is completely free on the other hand. 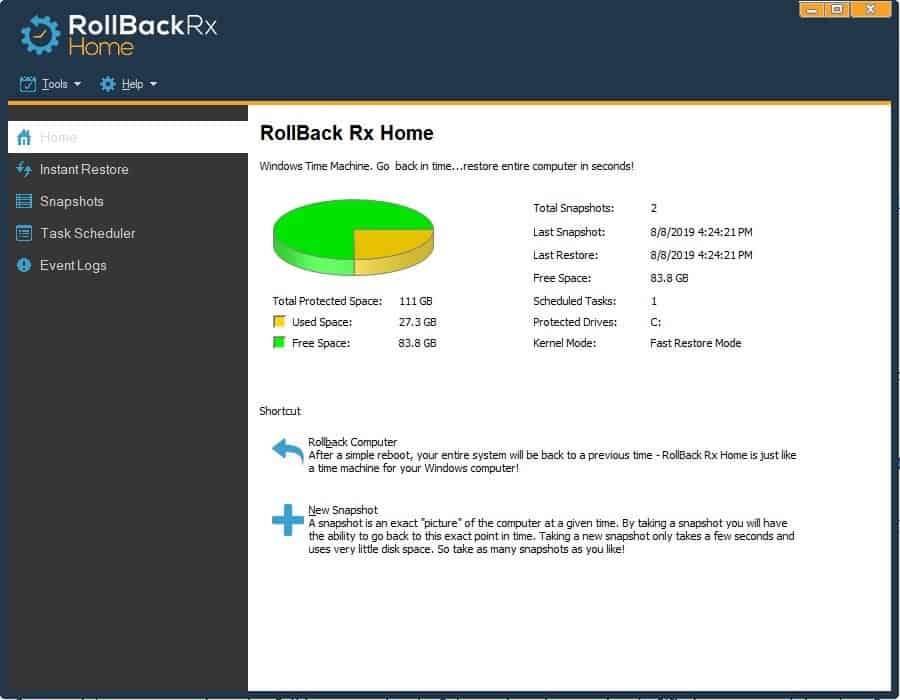 RollBack Rx has a very straight-forward GUI. The side-panel has 5 tabs, and the right-pane displays the options for the currently selected tab.

The Home tab shows a pie-chart of your hard drive’s space (used/free), and also displays information regarding the last snapshot/restore. You will also find 2 options here:

Note: The program creates a baseline snapshot which is quite large. This is the primary snapshot, and all future ones created depend on it and use less space because of that. You can delete the baseline snapshot, but the program will create a new one, the next time you take a snapshot. You don’t need to mess with it.

Instant restore has options to Rollback computer (same as above), Recover Files from snapshots, and Explore Snapshot. The last option opens the snapshot as a virtual disk (displayed as a removable drive). You can use it to recover any data that was saved in the snapshot.

The Snapshots tab lists all available restore points which were created by RollBack Rx, and lets you manage them. The Event Logs tab is a troubleshooting tool which stores information about events and issues.

This is the recovery environment which is available to boot just before Windows starts. You can enter the console using the Home key during boot. It has options to Rollback the computer, take a new snapshot, uninstall the program, access some built-in tools and exit the recovery. It’s very user-friendly, and you will get used to it in no time.

You can see from the following screenshot that I restored the computer twice today. I did so once using the Sub-console and once using the Windows program’s interface. I tested them to ensure everything works, and it’s just fine. 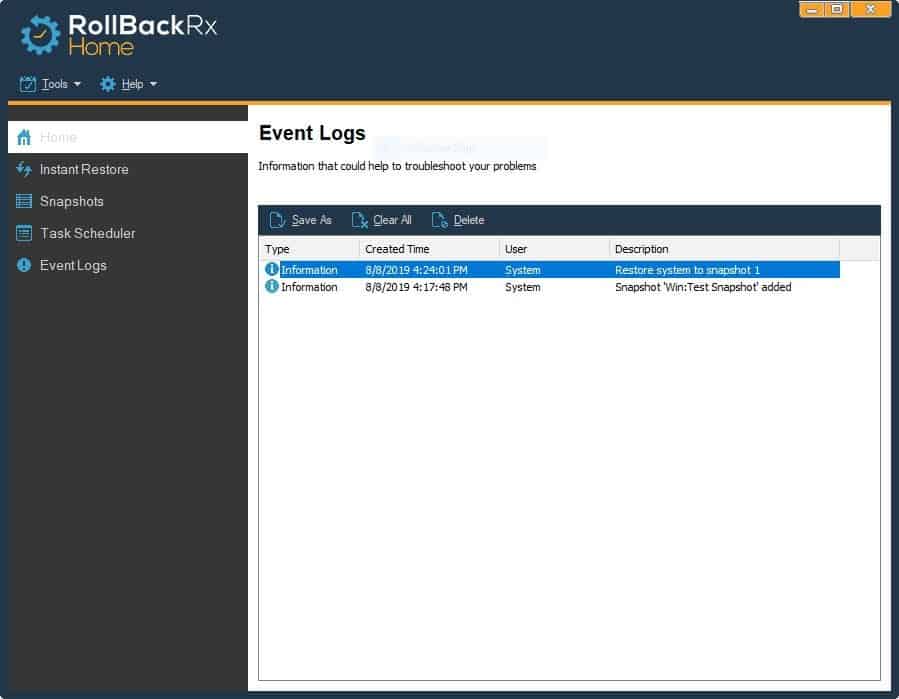 How does it work?

The concept is quite simple. RollBack Rx captures a snapshot of the current state of Windows to be used as a backup. It can be useful when your computer crashes, is throwing out BSODs, fails to boot, or even gets infected by malware. You could even use it to take a snapshot before trying a new program, and in case of issues, just rollback to the previous state.

Does this mean my computer will not save files after a reboot? No, that only happens if you manually revert to a previous snapshot from RollBack Rx’s interface. When you reboot the computer normally, it works just like it should with all your data intact.

RollBack Rx has been very reliable for me. When I ran into issues/crashes, all I had to do was revert to an older snapshot. The most notable of this was when I installed iTunes on my PC a few days after getting an iPad. Maybe it was a buggy version or something which caused my computer to crash, but I was able to restore it to a previous state.

However, I did face a problem with RollBack once. A few years ago, I was trying to update to a new major version of Windows 10 and it always failed. Searching for a fix returned no results (at that time). Though the update process was failing, I wasn’t worried since I had a previous snapshot to revert to. Thank goodness I had RollBack Rx, right? Here’s the funny part.

I eventually realized the issue could be related to RollBack Rx. Maybe it was the recovery console preventing the OS from writing the data to the C: drive?. This had never happened before, as I had always been able to update Windows. But when I uninstalled the application, I was able to update Windows as usual. I reinstalled it later, and everything was fine. This happened a long time ago, perhaps in 2016.

Fast-forward to 2019, and the issue has an official fix. Click on the tools menu in RollBack’s GUI, select Advanced Settings and enable the option which says “Allow install of Windows Updates that cannot be rolled back”.

Note: RollBack Rx disables System Restore when you install it, but you can manually enable it. You should do this right away.

While I recommend using RollBack Rx, I would also like to remind you to get into the habit of backing up your data using Windows Backup (or another backup software for Windows such as Acronis or Macrium Reflect or something else) from time to time. There is no harm in having a backup of a backup.