Former ESPN host Jemele Hill is being slammed as ‘racist’ and ‘pro-segregationist’ for urging African-American athletes to spurn predominantly white colleges in favor of Historically Black Colleges and Universities (HBCUs).

In her first magazine piece for The Atlantic, Hill contends that black athletes are helping the fortunes of major universities like Michigan, Alabama, and Miami, while HBCUs have struggled to compete financially, both in the athletic department and in terms of overall endowment.

HBCUs were established before the Civil Rights Act of 1964 in order to provide African-Americans a college education during an age of rampant segregation. There are more than 100 such institutions, most of which were founded in the aftermath of the Civil War. HBCUs do not discriminate against non-black students.

‘Black athletes have attracted money and attention to the predominantly white universities that showcase them,’ Hill wrote. ‘Meanwhile, black colleges are struggling. Alabama’s athletic department generated $174 million in the 2016–17 school year, whereas the HBCU that generated the most money from athletics that year, Prairie View A&M, brought in less than $18 million. 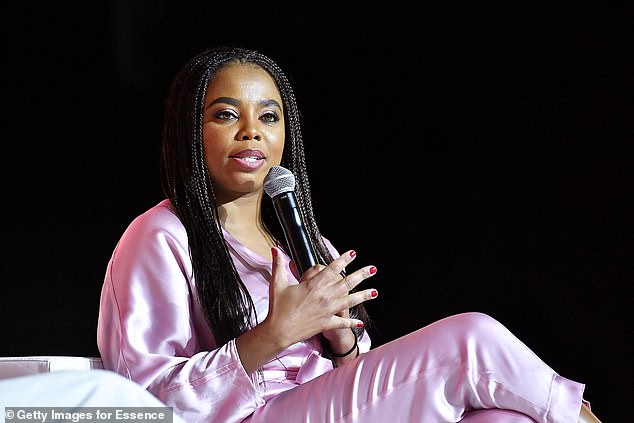 Jemele Hill contends that black athletes are helping the fortunes of major universities like Michigan, Alabama, and Miami, while HBCUs have struggled to compete financially, both in the athletic department and in terms of overall endowment

She also notes that the predominately white schools’ ‘collective multibillion-dollar revenues have been built largely on the exertions of (uncompensated) black athletes.’

As Hill explained, the NCAA grossed $1.1 billion in 2017, most of which was generated from the Division I men’s basketball tournament. The organization extended its media deal in 2016 for an addition $8.8 billion, and there are around 30 Division I schools that make at least $100 million annually in athletics alone.

The problem, Hill argues, is that ‘black men make up only 2.4 percent of the total undergraduate population’ in the 65 schools that populate the top five athletic conferences (Big Ten, ACC, SEC, Pac 12, Big 12).

‘The flight of black athletes to majority-white colleges has been devastating to HBCUs,’ she wrote, adding, ‘What if a group of elite athletes collectively made the choice to attend HBCUs?’

While Hill’s argument was embraced by some, others criticized her remarks as being ‘racist’ and even ‘pro-segregationist.’

‘Jemele Hill coming out as pro-segregation is probably the least surprising thing I’ve seen this week,’ wrote one Twitter user.

Hill left ESPN to join The Atlantic in 2018.

The Michigan State graduate was famously suspended at ESPN in 2017 for calling President Trump a ‘white supremacist,’ ‘bigot,’ and someone who is ‘unqualified and unfit’ for office.

Later, when Dallas Cowboys owner Jerry Jones reportedly threatened to bench any player he saw kneeling in protest during the national anthem, Hill encouraged fans to boycott the team.