Have reason to be suspicious of a partner or employer? Feel that someone is watching you, perhaps with a hidden camera?

You could discover the truth if only you had some way of detecting the presence of a hidden camera. Fortunately, apps are available to help you find hidden surveillance cameras using just your smartphone.

Ready to find those secret cameras?

You Are Being Watched

Someone is watching you. This is pretty much irrefutable in the post-Snowden era. But digital surveillance of emails and telephone records is less hair-raising than someone observing your movements via a hidden camera.

It’s unlikely that you have never been filmed out in public. You have almost certainly been caught on CCTV. You might even have been filmed from distance on a TV news report.

Over the years it has become less surprising as we’ve become more accepting of closed-circuit cameras, security cameras, and more. You’re probably not comfortable with this, but you can at least accept it as part of keeping society safe.

But what about closer to home? Are you comfortable with surveillance cameras in the office, development room, bathrooms, and dressing rooms? Or are these places where you wouldn’t normally expect to find a camera watching your every move?

Without being made aware of such surveillance in advance, you could find yourself being recorded without your knowledge. Your movements and actions would be tracked, perhaps judged, and possibly misinterpreted.

This intrusion might be performed using professionally manufactured security cameras, or custom-built ones. It might be a standard camera for secret filming, or even an old smartphone or tablet, re-purposed for hidden observation.

While it might seem like a James Bond gadget, you can use your smartphone to detect hidden cameras. In general, two common methods are used to achieve this.

Find a Hidden Camera With an Android Phone

Use iOS to Find a Hidden Camera

Need a hidden camera app for your iPhone?

Whichever app you choose, you’ll be able to detect cameras and speakers, perhaps even hidden computers.

They generally work in the same way: proximity to a camera or other surveillance device is displayed. There should be enough information provided to give you an idea as to where it is.

For example, we tried the Hidden Camera Detector app on Android. After starting the app, it displays a red glow when the smartphone is in the proximity of a camera. Use the direction of the red glow to find the position of the camera. 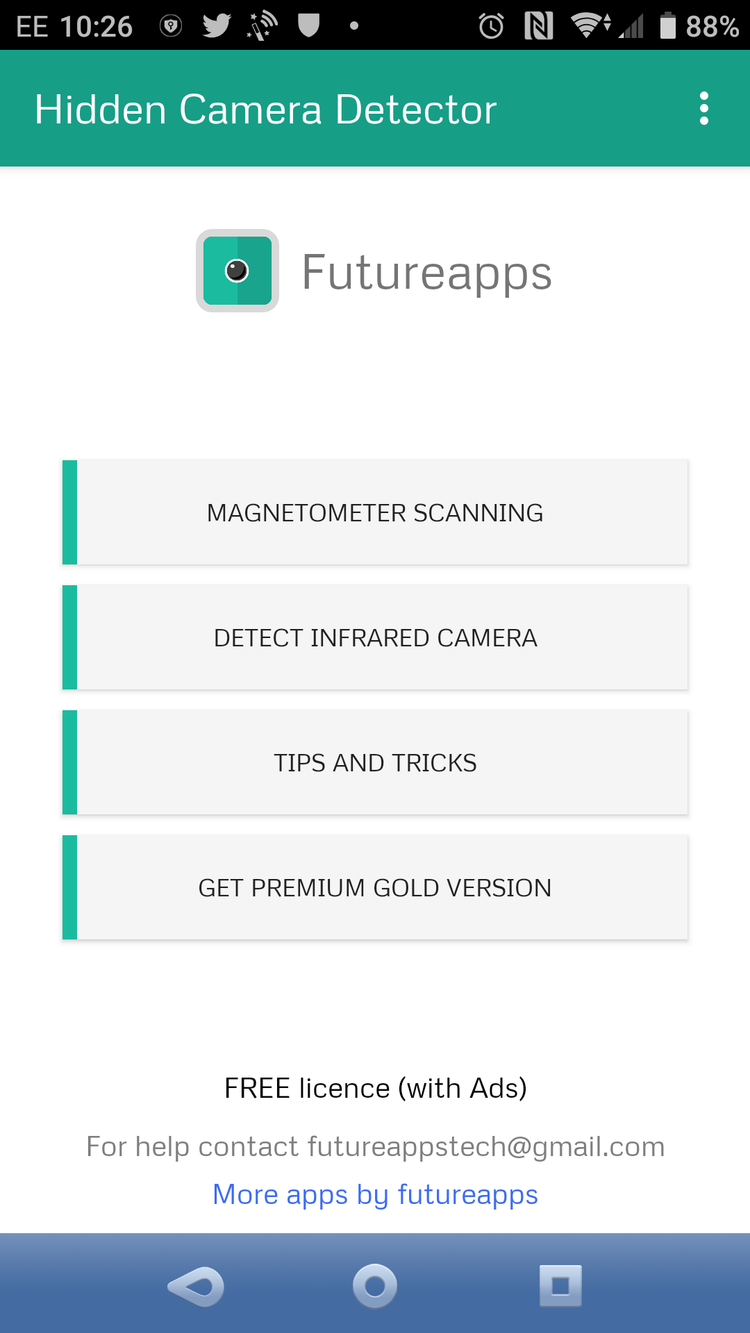 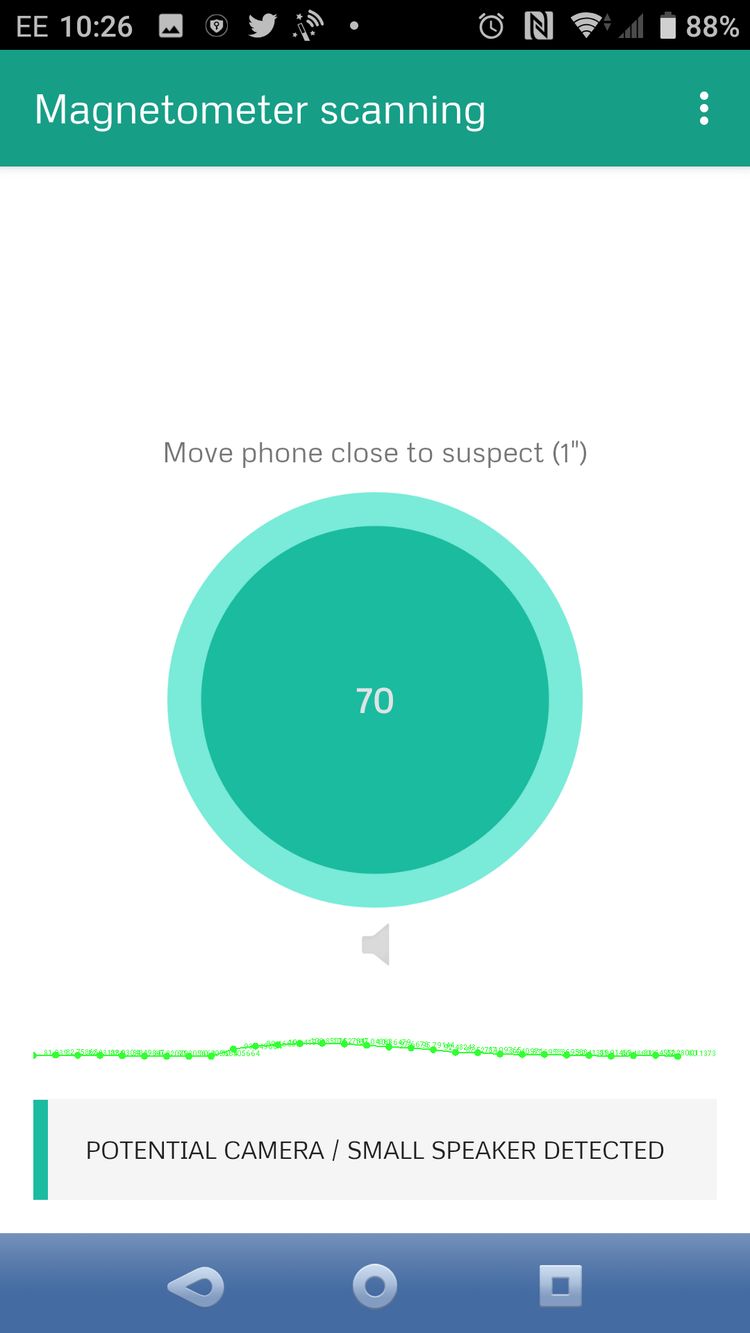 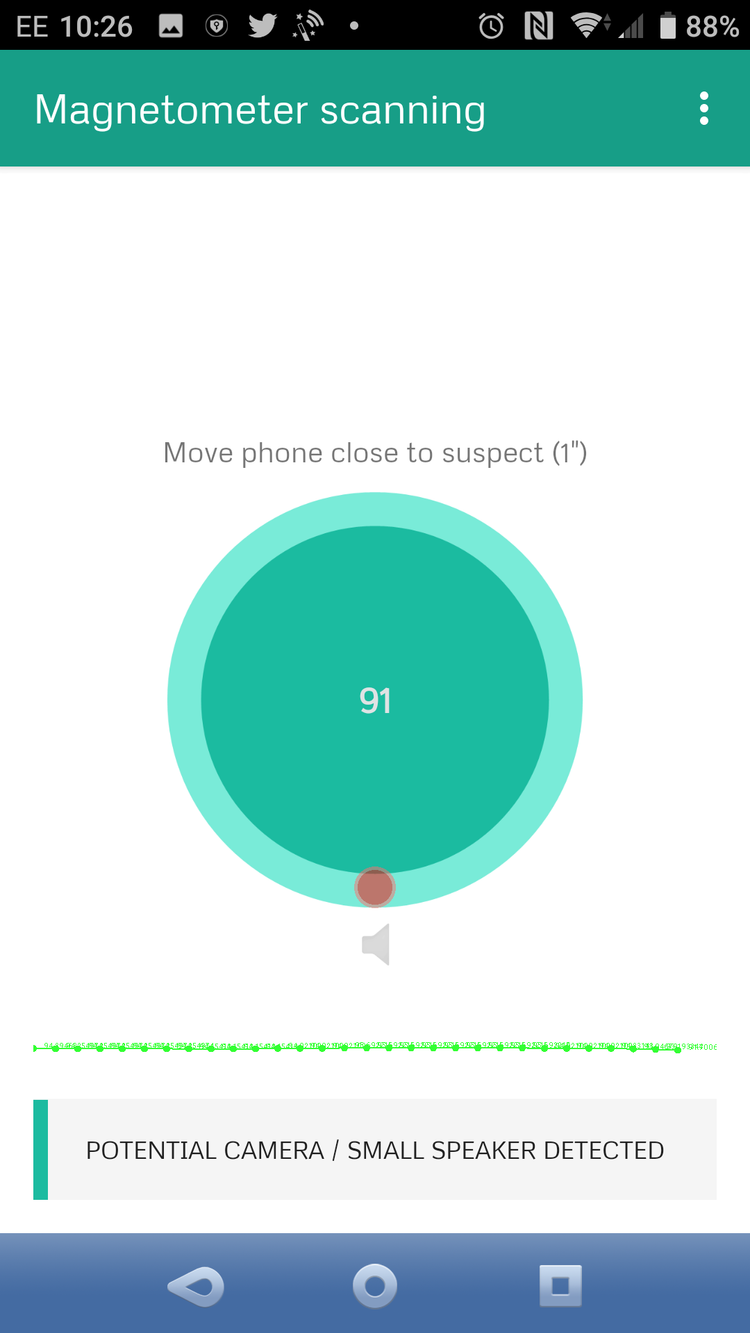 The scanner will also glow near other types of hardware, but with different results. A number displayed in the middle of the screen will exceed 100 when a camera is detected.

Hidden Camera Detector also features an IR mode with which you can find cameras that have so far eluded you.

This is done by pointing the smartphone camera at an area where a camera might be hidden. If a bright white disc can be seen on your phone’s display, a hidden camera is nearby.

Note that when using these apps, you should first be sure that you know what technology is in the room. TVs, computers, smart assistants (such as the Amazon Echo) and other hardware can interfere.

However, it will also help if you hold the phone correctly. You might initially think that holding the device flat (like a remote control) will give better results. Where the sensors are placed within your phone will affect this. A bit of practice will help you get the best angle.

Remember that other options are available. If you have access to an infrared camera, for instance, this should detect a hidden camera, while low-cost devices using wireless networking may well appear in the list of nearby Wi-Fi devices in your home.

If you’re particularly concerned, you might also consider some specialist detection hardware. For example, this hidden camera bug detector has RF signal detection, magnetic field detection, infrared detection, and can be used for cameras and hidden microphones.

What to Do When You Find a Hidden Camera

It’s all very well knowing that a hidden surveillance camera is watching you, supposedly without your knowledge. But what should you do about it? Well, you could always take it to a higher authority, but in the meantime, you might wish to act to protect against spying.

Note, however, that the problem with this is as soon as you do this, you may well alert the observer to your realization.

However, if you’re determined to be seen, you should employ things like masking tape or adhesive putty to cover the lens, or conduct affairs beyond the camera’s viewing angle. For cameras possibly hidden high up, in light bulbs or smoke detectors, staying out of sight can be difficult. Don’t forget: anyone can use a security camera. Be sure to protect your property with 24/7 camera surveillance.

How to Find Hidden Cameras Using Your Mobile Phone