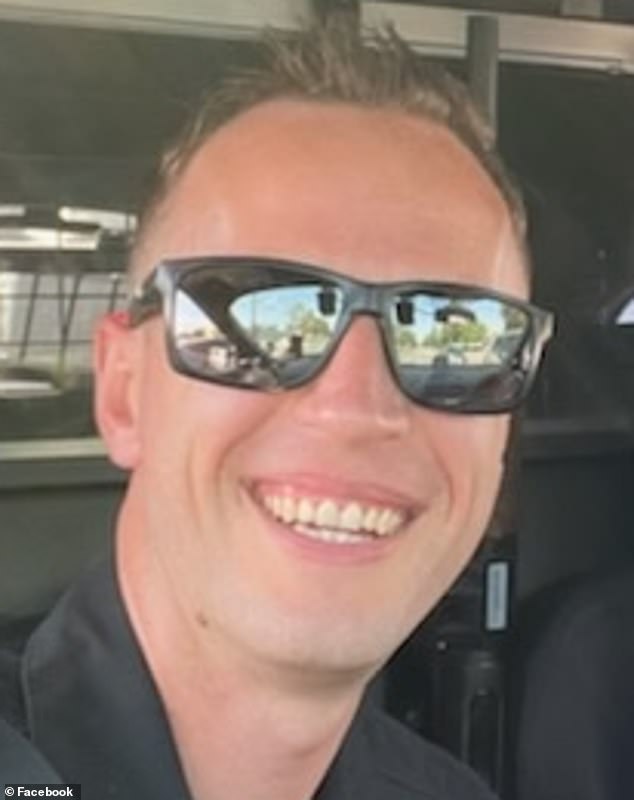 The LAPD officer who died in a mysterious routine training accident in May, had a history of whistleblowing.

In one incident, Houston Tipping got a sergeant fired for lying about an internal affairs investigating involving a chocolate penis.

Tipping, 32, was five-year veteran with the LAPD and worked with the department’s bicycle unit.

He suffered a fatal spinal cord injury after he fell down while holding another officer in a ‘bear hug’ grappling exercise on May 26 at the Police Academy in what a coroner ruled was an accident.

According to an LAPD report, Tipping’s last words were: ‘I can’t breathe.’

In a previous incident, Tipping had been involved in an internal affairs investigation that involved a fellow officer bringing a chocolate penis into work as a joke.

During that investigation, Tipping revealed that a sergeant had lied to internal affairs about the joke. As a result, that sergeant was fired. Gage said following that: ‘[The sergeant’s] friends were not happy.’

Gage says that friends of that sergeant were also present at the fatal training exercise, according to attorney Brad Gage.

Officer Houston Tipping, 32, was five-year veteran with the LAPD and worked with the department’s bicycle unit 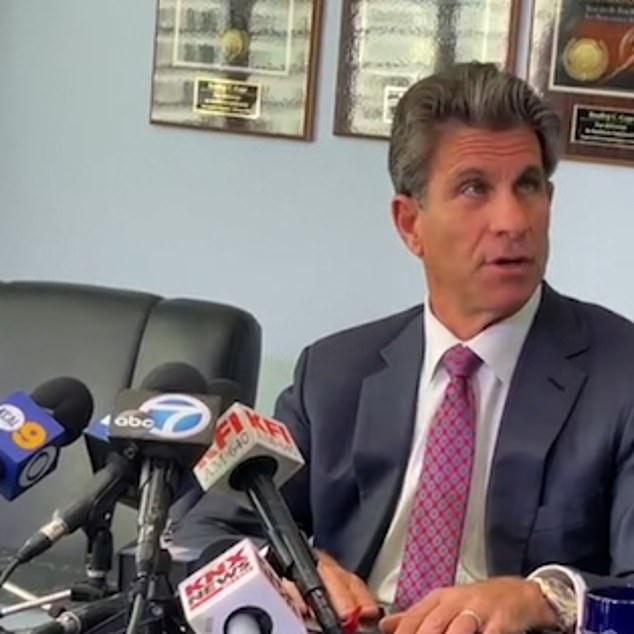 Brad Gage, the attorney for Tipping’s mother Shirley Huffman, made the bombshell claims in a press conference yesterday

Gage told DailyMail.com exclusively that the rape that Tipping was investigating occurred in a house in Northridge, California, in June 2021. At the time, Tipping wrote a report on the rape.

During the incident, the woman said that she had a massage tool ‘placed in her vagina,’ Gage said.

He added that during the alleged rape, the officers were all in uniform and that the victim was able to name three of the four after seeing their names on their badges. One of those cops was present during the training accident.

He said that the initial report on the incident did not mention a rape nor did it mention that some of those involved were police officers.

Gage was that it was two lines long and referred to the incident merely as an ‘attack.’

It wasn’t until Tipping began investigating the incident, that the allegations of rape became apparent.

In Tipping’s report, the victim said that she was raped by four police officers.

DailyMail.com has reached out to the LAPD for more information on that investigation.

Gage, who was hired by Tipping’s mother, Shirley Huffman,  said: ‘I don’t think he talked to anybody about the case. He did seem to have a change of attitude.’

‘I think he knew one of the officers accused. Apparently, they used to be much closer friends and they weren’t anymore.’

Gage continued: ‘He decided to look elsewhere for a job, which seems logically connected to this incident.’

His search for new employment was not related to worries of his safety but rather because he was ‘so disgusted’ by the case, Gage said.

Gage also told DailyMail.com that he has been in touch with the district attorney’s office in regards to the case.

The training involved the simulation of being attacked by a mob, the LAPD’s official report said.

Tipping was playing the role of a suspect attacking an officer mounted on a bicycle.

The report said that Tipping was struck with a foam baton and dropped to one knee, to simulate a strike with a real baton.

The report continued: ‘As the two fell to the floor, Officer Tipping’s neck remained in that grasp.’

According to the report, when his fellow officers realized that Tipping was struggling to speak, paramedics were called and first-aid efforts began.

The official cause of death was the consequences of a ‘cervical spinal cord injury’ and ruled an ‘accident.’ He died on May 29, three days after the exercise took place.

His mother alleges he was ‘repeatedly struck in the head severely enough that he bled’ during the training activity, according to the new documents.

In the documents, the move that Tipping found himself in was akin to a ‘pile driver type of action.’

In addition to the spinal injuries, Gage says that Tipping suffered from broken ribs, a liver laceration, multiple head injuries including a hemorrhage at the back of his head.

The LAPD has denied that Tipping suffered a head injuries. 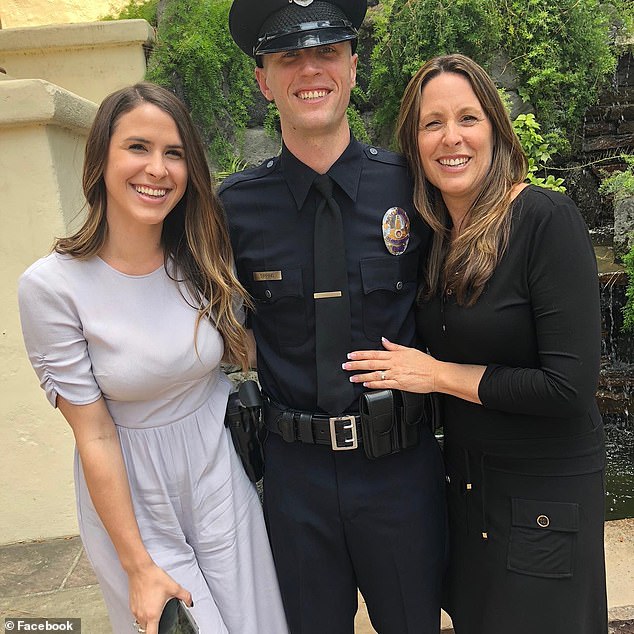 Officer Tipping (center) was allegedly a whistleblower on an LAPD gang rape, Shirley Huffman (right), alleges in her lawsuit (pictured alongside his sister Katherine)

An autopsy found Tipping suffered broken ribs that suggested the use of a LUCAS device, an automatic CPR machine, suggesting there were attempts to revive him.

Speaking at press conference on October 4, Gage said: ‘The problem with that is other medical reports show the LUCAS device was never used.’

He has also raised questions as to why no security footage was available.

He said: ‘LAPD claims there was no video taken of the training this day. We don’t believe that’s accurate.’

In the press conference, Gage explicitly stated that he believed that there was a cover-up involving Tipping’s death. 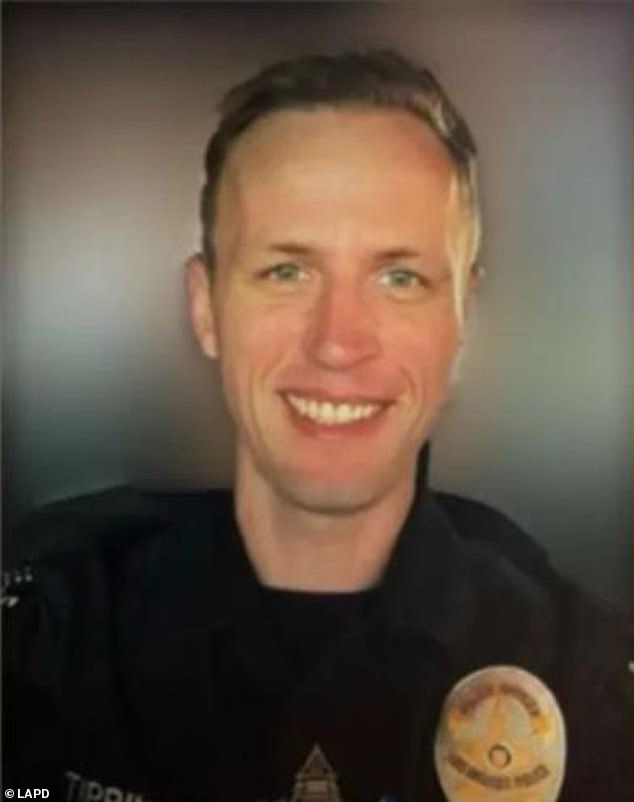 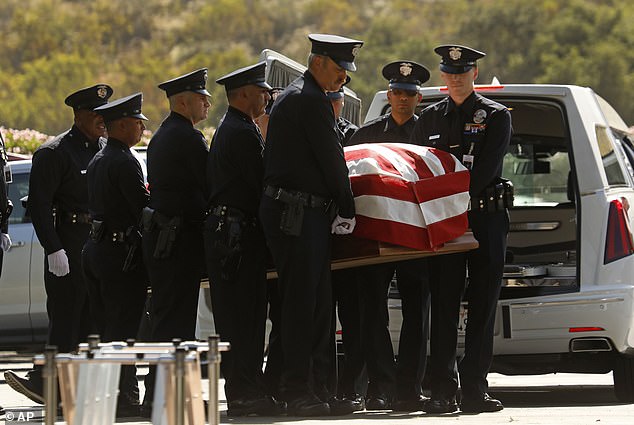 ‘A report was taken by Officer Tipping and I have seen that report, that reported the case that there was a sexual attack and it indicates that an object was placed into the sexual organ of the female victim.’

‘The female victim claims that she was raped by four different people, all LAPD officers.

‘She knew the names of some of those officers because they were in uniform and they had their name tags on.

‘The name of one of those officers, the name tag seems to correlate with one of the officers that was at the training.’

He added: ‘I think the officers were very brazen and thought they were above the law but no one is above the law.’

‘I’m sure these actions are being covered up. The thought of a code of silence or a cover-up by a police department should not be shocking or surprising to anyone.’ 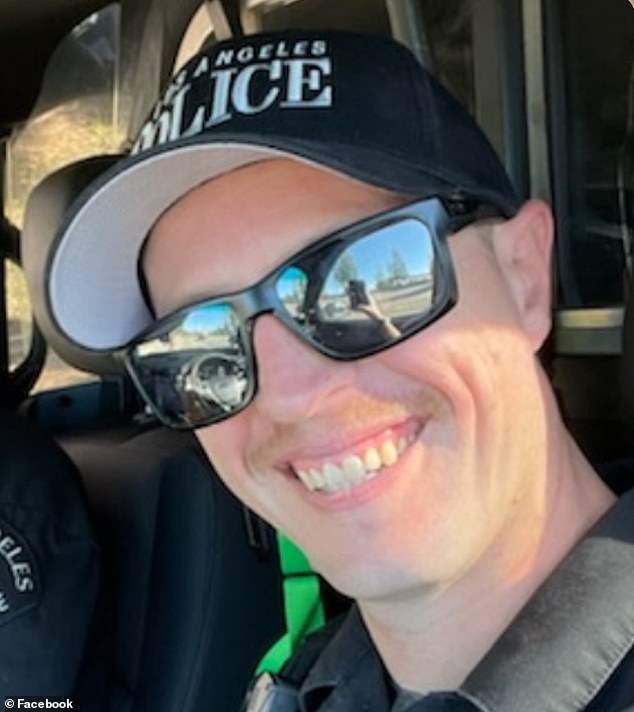 Tipping, right, patrolled the Devonshire neighborhood of the City of Angels and was a bike instructor who reportedly ‘loved serving as a police officer’ 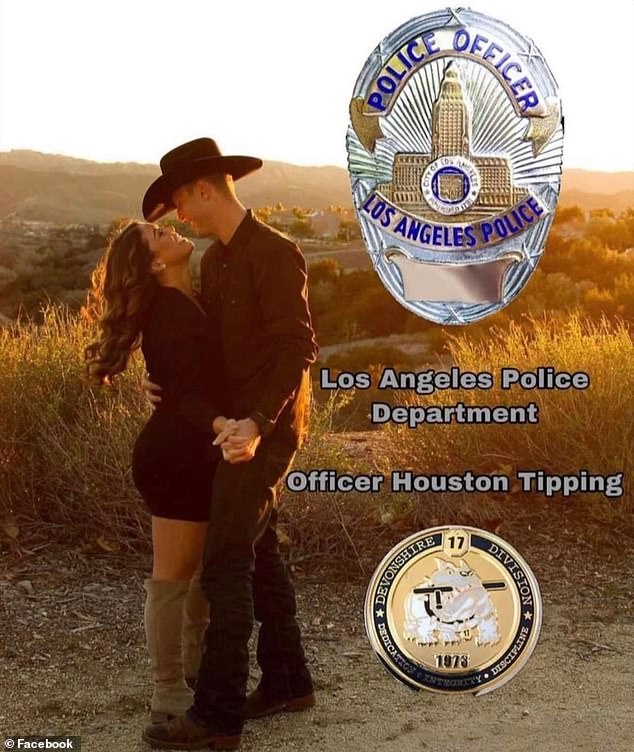 Tipping is survived by his girlfriend, Britney (pictured) as well as his parents Richard and Shirley; his stepfather Bob; and siblings Kat and Tyler 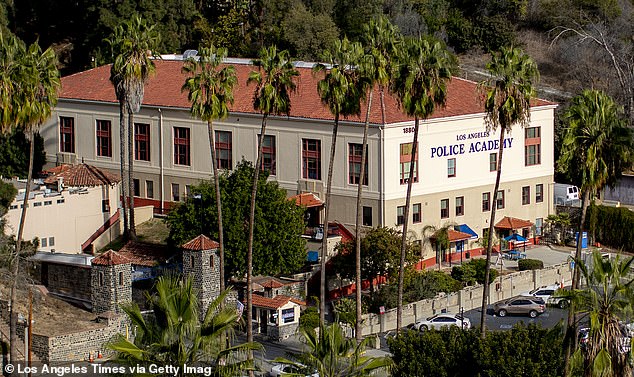 During his funeral LAPD Chief Michel Moore knelt before Tipping’s parents and presented them with an American flag.

The chief called Tipping impressive to his peers and said he had a ‘willingness to go the extra mile to make the world a better place.’

Tipping patrolled around the Devonshire neighborhood and ‘loved serving as a police officer,’ according to the Los Angeles Police Protective League, which said he will be remembered ‘for how he loved and made people laugh.’

He was also an organ donor and his ‘selflessness’ was used to help ‘save other lives.’

Tipping is survived by his parents, Richard and Shirley; his stepfather Bob; siblings Kat and Tyler; and his girlfriend, Britney.

Join 378 other subscribers
Follow The LR Zone on WordPress.com